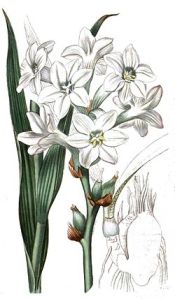 Tuberoses are dangerous demonic flowers. Their oil is one of the great classic natural ingredients of perfume, easy to extract but hard to handle with skill. Tuberoses are said to deflower virgins and heat the blood; they camouflage the scent of death and the dying. Louis XIV planted them out in the gardens of Versailles in Sevres jardinieres; Marie Antoinette’s perfumer relied on them; in her ineffable “A.B.C” Marlene Dietrich told us they not only smell good, they taste delicious. Part of the mystery of the tuberose is that relatively few British people still know precisely what it is. It was unknown in Europe until the seventeenth century when it was introduced from South America and Asia by the British and Spanish colonial fleets. The name which sounds so exotic confuses the unwary and I fell into this trap myself when I first read Gone With The Wind at school and imagined the tuberoses in the girls’ hair at the Atlanta Ball to be tiny tightly coiled rosebuds – or “tubular roses” as you sometimes hear the muddled say. The name is simply French for “tuberous” – a flower grows from a tuber. A disappointingly mundane title for this exotic member of the lily family; but in fact its implications links the flower to the orchid, the avocado, the onion, mandrake, potato and many other plants which because of their growth pattern have graphically sexual connotations.

Orchids and avocados are named because of their supposed resemblance to human testicles; asparagus is explicitly phallic; lettuces and onions bolt in a mad spurt of upward growth, the lettuce exuding a milky juice in the process. Every flower and plant known to our ancestors was imbued with magic, not merely because of its scent and healing or destructive properties but because it symbolised eternal life and reproduction. It died and came again with the seasons; its unstoppable budding, flowering, stalk, leaves, roots and fruit were all illustrative of the human cycle of fertility and reproduction. If it exuded a rich perfume in addition to a suggestive shape it was used as the most powerful of aphrodisiacs. Maybe too the popularity of tuberose in modern perfumery is partially explained by its being such a relatively new scent to Europeans: like Australia and America it is raw, new and still developing, still having the corners knocked off it. We are still coming to terms with it, like vanilla and patchouli; equally ubiquitous oils. Rose, jasmine and iris have had thousands of years for us to get our noses and brains around: tuberose is still to be fathomed. It is a metaphor for the choosing of a perfume in a shop: we keep nipping in day after day for another sniff, still not convinced that we like it but hooked on something in the formula; like moths attracted not to the light but to the deep softness darkness behind the light.

Far too extravagant and showy for all but the most recherche tastes, tuberose was used sparingly by the great perfumers of the early twentieth century: Guerlain and Caron came to it very late in the day. Germaine Cellier first put it on the map with Fracas in 1946, a Robert Piguet scent whose legend continues to glow and evolve. Fracas was said to be an olfactory incarnation of Rita Hayworth – the screen image, not the tragic private personality (“They go to bed with Gilda but they wake up with me…”). Fracas is a dazzling pink champagne burst of fruit blossom, jasmine and tuberose sweetened with vanilla, tonka and musk. Like Rita it is lithe, sinuous, unpredictable and intensely glamorous; unlike her, it has a frilly, girlish side maybe on account of its intense sweetness which set the trend for tuberose perfumes for decades to come. As I write I am wearing the spectacular new Madonna Truth or Dare which releases cerise clouds of thickest tuberose so sweet it seems to be working from a base of Lyons Golden Syrup. There are also fruity hints which seem, as so often with this school of scents, to suggest strawberry tarts or summer jam just beginning to roll to the boil. If you smell pure white tuberose flowers in a hothouse or sheltered garden they are deliciously intense and, like gardenias and tiare, faintly reminiscent of coconut milk, but the ersatz perfumery sweetness is absent. And I rather miss that. I find it brings out the escapist and slightly insane quality of the flower, the bloom from another dimension. Maybe I am simply buying into its magical heritage of tuberose folk lore legend: and I fancy that Fracas and its many successors have done the same. The Gantier offering – Tubereuse – adds another element: a sleek sable animal quality, a damp pelt covered in just-melting snow which suits it to winter wear and the Christmas party spirit: a dance on a volcano spurting black and rosy lava.

Carnal Flower is tuberose re-invented for the 21st century: uber-green tuberose, leaf and loam and all. This is tuberose stripped bare, reconstructed, throwing Fracas and her syrupy sisters out of the pram. Carnal Flower shakes off the more sinister aspects of the fragrance while preserving the erotic: this is a cool morning tuberose full of fresh air, warm rain and dew. There is nothing of the funeral parlour or the exhibitionist actress about it, those aspects which Billy Wilder exploits so brilliantly when he has Norma Desmond boiling with claustrophobic tuberose in Sunset Boulevard. Carnal Flower is the plant dissected with the botanist’s scalpel and reassembled as geometric perfume. On the skin it slowly grows and glows, like the opening of a wild orchid in a marshy field; its movements are delicate and unexpected, sometimes hard to follow: a sensory revolution. Maybe this presentation of an open air wholesome glowing tuberose is the secret of its success: while it continues to mesmerise and enthral it lacks the beaded curtain and Tiffany lamp oppressiveness of its predecessors. Tuberose pruned back and growing fresh from the root: a walk in a morning garden rather than crawling into bed between old-rose velvet draperies. It could almost be bridal, a first for this type of fragrance. Nonetheless, the essential spice of danger still lurks in the title: making you think of those obscene scarlet veined gamboge pitcher plants waiting in boggy meadows for unwary insects. Tuberose is a flower which must always be handled with discretion.