I warned (or promised) you that we should return again to the theme of sleep; and what better time than now when the lurch into spring plays havoc with the body. The clocks go forward, temperatures fluctuate violently, clothes feel too heavy or too light. An Iraqi Kurdish barber once told me that the logical healthy remedy was blood letting – to drain off the poisons of the winter, to relieve seasonal tensions and impurities and that sensation of fogged vagueness. Twilight Sleep therefore strikes a chord: it’s a title I had long bagged for use, but I now find that Edith Wharton beat me to it in 1927. My great aunt was sedated with the German twilight sleep procedure in 1922: she awoke with twin daughters and a foster baby in the bed. A dream transformation indeed.

The Greeks believed that dreams come to and fro from the Valley of Sleep: those that pass out through the Gates of Ivory are mere fantasies, those that leave through the Gates of Horn are destined to come true. The dreams and thoughts of Twilight Sleep are those wandering reveries of half reality, half unconsciousness when we drift and then come to ourselves still unable for a few seconds to distinguish fact from fiction – those moments when we startle awake at our desks, on the Tube or before the tv unsure where or who we are, maybe drooling a little, bemused and half stunned.

Parfumerie Generale’s L’Eau de Circe is a magical but baffling phantasm of this realm. A soft warm damp cloud tinted with all the hues of the setting summer sun, this perfume is mysterious as it is seductive. It references the ethereal and the earthy, the grotesque and the romantic. Circe was an enchantress from a family of magicians who beguiled Odysseus on his sea voyage home from Troy. The hero’s thwarted attempts to reach his wife in Ithaca follow a classic anxiety dream pattern: like those nightmares in which one tries continually to catch a train, pack a suitcase or find the right book, Odysseus is hindered at every turn by the intervention of a supernatural being. Cyclops, Sirens, Lotus Eaters all impede him. The lovely Circe lays on a luscious feast in the gardens of a scented palace for the crew of the traveller’s ship; then on a whim, disgusted by their gluttony and drunkenness, she transforms them into swine in a typical abrupt dream metamorphosis. With divine aid Odysseus forces Circe to restore his men to human shape and in another sudden volte face the witch becomes a benevolent fairy.

Pierre Guillaume’s scent floats in an intoxicating haze of lilacs, osmanthus. The initial effect is of harmony, gentle innocence and peace; but then the animalic powdery musky lilac starts to pound and a fruity vinous note of osmanthus introduces a faintly oppressive mood, heightened by a dampness, a humidity: hypnotic yes, but maybe with a touch of feminine menace. Is osmanthus perhaps one of those trees beneath which it is dangerous to sleep? Do the sleepers awake raving like those who doze beneath the cypress, the datura or the pink and white oleander? L’Eau de Circe captures that moment just before the gorging sailors become pigs, the moment when the sorceress’s baleful beautiful green eye freezes the feasters with a basilisk stare. It reminds us of Alma Tadema’s painting of another doomy banquet – the diners frozen in time as the suspended canopies of roses let fall and millions of petals suffocate the revellers beneath. L’Eau de Circe is a riddle worthy of the sphinx; we smell it like children thrilled by the beauty and terror of a fairytale, reassured by the certainty of a happy outcome 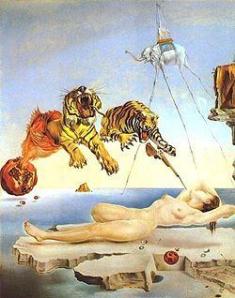 I must have od’d on perfume this past month: I have begun to dream in fragrance – a new and faintly disconcerting experience, although it has the makings of an exciting adventure. Last night I was awoken by a powerful scent of sweet hot just-about-to-singe pineapple meringue that hit me as shrilly and disturbingly as any alarm call. Of its dream context I can remember nothing but, my word, the impact was massive. All my animal sense of danger on electric alert I lurched into the kitchen to find nothing more than an cold and empty oven, a scoured cake tin – and only the bleak smell of a London February at two o’clock in the morning: a whiff of soap, grubby rain and cold hot water bottles.

Preceding this was what I’ll call the Warner Brothers dream: what seemed to be an entire imaginary movie in lush 1940’s style but shot in scent rather than colour or 3D or what have you. The leading lady was a kind of Stanwyck / Bacall / Bette Davis amalgam but defined and described not by face, dialogue, voice or character; rather by clouds of mauve, magenta and violet perfume which emoted and vibrated like a symphony, wordless but nonetheless explicit – Apres L’Ondee, Teint de Neige, Iris de Nuit, Jasmin Imperatrice Eugenie; waves of stocks, sweet pea, heliotrope and lilac underlaid with vanilla, tonka and musk. A romantic melodrama, evidently; just about coherent through familiarity with the genre and the medium, but the plot line was as challenging as adapting to a new language. Strange, when we so frequently and loosely talk of fragrance as being the stuff of dreams: when it actually becomes so there is the risk of getting lost and left behind.

I can see that this all kind of ties in with my synaesthetic tendencies; and I have always dreamed profusely, and in colour rather than black and white. What puzzles me about this new development is this: habitually it is the tiny almost unnoticed details of my day which appear in that night’s dreams and are given the full Dali treatment – a note to the milkman, someone’s name, a tin of paint, the washing machine filter – take on exaggerated and grotesque significance. Whereas things with which I am preoccupied, or by which I am delighted or shocked rarely put in an appearance. I almost never dream about horrors in the news, for instance. I learned as a child to think about those things I wished to avoid in sleep just before dropping off, thus infallibly precluding nightmares later.

Yet my life is soaked and permeated by scent: maybe I’m starting to take it for granted? Those with thoughts on or experience of this phenomenon please write in.

A kind reader and interlocutor asks for my thoughts on insomnia: a nightmare, is my oxymoronic response. I am not an habitual sufferer but some of my nearest and dearest suffer tortures from les nuits blanches. As ever, in her ineffable “ABC” Marlene Dietrich offers some practical German lore: prior to retiring prepare a dark rye sandwich filled with sardine and chopped raw onion. Eat it in bed. It will knock you out like a blow from a sandbag. I’ve never had the nerve to try this remedy, as inevitably raw onion plays hell with me but there’s no doubt that ingestion of food at 3am (a biscuit, a spoonful of honey, warm milk- Nature’s own proven sleeping draught) can work wonders. Which is why a touch of gourmand perfume on wrist and pillow may help to induce sleep: I’m thinking of the creamy white chocolate of Musc Maori, a velvety syrup of tonka, vanilla and cocoa to lull the brain and unwind the knotted nerves.

But as sufferers know there’s a difference between temporary sleeplessness and the writhing agonies of an insomniacs white night: the racing mind, the sweats, the anxiety, desperation and angry despair. The bedside clock leering at you as it races towards its predestined pre-dawn shrilling. I associate this condition with extremes of temperature, tangled bedclothes and those terrible peppermint green nylon fitted sheets that were all the go in the 1970’s and which shot forth static sparks as your restless feet pedalled the bed: the scent of perfume stimulants like Mad Madame and Malaise of the 1970s – the electric tuberose of Madame being so thrilling and hyper that it banishes forever the thought of sleep. The purple hearts of perfume which bring back memories of a Fulham cafe called “Up All Night”: an ironically ambiguous name I always thought.

For, as sleep inexorably recedes, the nervous system becomes so unbearably taut that any loud smell may amplify unbearably like the ticking of that cruel clock. Try time-honoured lavender to soothe: Tauer’s Reverie Au Jardin reminds me of my grandmother’s excellent advice to meditate on the colour and texture of a sapphire velvet curtain. Here’s a translucent blue-green breeze of Alpine lavender which cools your hand and guides you to a soft cool bed of roses and soporific scented woods. Just deeply inhaling and rolling your eyes upwards at its beauty may help. First World War shell-shocked patients were advised to roll up their eyeballs as far back as they’d go. This I have tried: it causes involuntary yawning, and this infallibly – eventually – promotes sleep. It worked last night. Try it while you’re waiting for Santa this Christmas Eve…