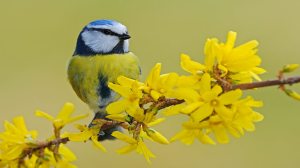 We are still officially in winter for another three weeks but these last days of February have their own loveliness. Every year without fail we always have a brief foretaste of spring round about now as if to tide us over until the real thing takes over, a little picture preview to get us through the last bit of winter. It’s already light until six o’clock, the air smells young again: the older I get the more I think I prefer these unique days at the turn of the season to the rather uncontrolled frenzy of the true spring which often feels overpoweringly passionate, making unreasonable demands of the stunned admirer.

The first daffodils came very early in February this year and now the garden foliage is the colour of the blue tits pecking at the peanuts suspended in my still skeletal magnolia. Have you noticed how uncannily and exactly the plumage of these little birds echoes and blends with the winter jasmine, the crocus, lungwort, the washed or stormy sky, and the blue grey yellow-green of all the young shoots? Only as they dart from branch to branch does movement render the tits fleetingly visible. And once April comes they appear to vanish altogether, swallowed up by golden verdance and blue sky. I never see one during the summer; colour absorbs them.

Delicious powerful scents are now lured forth by the first brief burst of warm sunshine. I haven’t seen violets in February for many years but there are stars of purple set in glowing green leaves by the bus stop – and that incredible mesmerising fragrance of musk and sugary petals: yesterday as I knelt in the muddy grass the violets smelled as sweet as though crystallised on a wedding cake. Maybe no other flower but the rose has such a familiar aroma. But be patient, push your nose beyond cliche – violets are fleshy & carnal and also reveal a faintly smoky note deep within them. They emit an echo of Frederic Malle’s Rubber Incense, a sheet of which I keep in my writing box to scent the stationery with “Saint des Saints”.

The vibernum flowers look like clots of mashed up raspberries and cream against emerald black leaves; their sharp spicy fragrance is faintly peppery, mingled with the damp earth & mould under the wall where the snowdrops’ luminous pearliness illuminates the dark purple hellebores and the mauve primulas. Those early daffodils exude the weird soaring excitement of a Sarah McCartney scent: a penetrating, exuberant and flagrant fragrance. The thrilling rubbery polleny yellow powderiness blown from satin trumpets is one of springtime’s most characteristic yet neglected perfumes.

“Gather ye rosebuds while ye may”! For the rain is back again and the forecast for the weekend predicts sharp frosts, hail and does not rule out snow. Hold back on your planting! But spring will keep and its scents continue to discreetly herald its coming.