“In winter a Queen sat at a window sewing..”: the classically simple first line of the folktale Snow White as told by the Brothers Grimm. To me, it resonated in the Arctic freeze of the past winter like the tolling of a bell, calling out over the snowbound land. We know exactly what is to follow: the words have an incantatory invocation, like the reciting of a spell, or the singing of a hymn. They release the power of the story afresh by setting out its elements in a formal familiarity from which one cannot deviate without losing essential magic.

Snow White is a parable of innumerable layers, exploring elements and psychoses of the human condition, sexuality, death and the toxic family. There is also the pervasive theme of vanity: seen not only in the jealousy of the step-mother, but in the desire of Snow White’s own mother for a perfect child in red, white and black; the baby that costs her her own life. On the first two visits of the wicked Queen to Snow White at the dwarves’ house she lures the girl with laces for her stays (pulled tight to asphyxiate her) and a poisoned comb for Snow White’s hair. Presumably even the humblest eighteenth century German peasant girl could identify with the desire for these modest luxuries: a fatal flask of perfume would maybe have been too rare ambiguous and arcane a treasure to feature in a fireside tale. Having failed to slay Snow White through vanity, the Witch-Queen then turns to another deadly sin, greed: and the fatal apple – the fruit that undid Eve.

But all through the tale you can smell scents – snow-bound castles and forests, glittering mountain peaks, flowering woods and pastures, fine leather and fabrics, snug little cottages fragrant with woodsmoke and beeswax polish. Cloon Keen‘s new fragrance Lune de Givre has a corresponding ethereal fantasy quality about it: a pale silvery green frosted moon shining over a winter landscape but stimulating warmth and growth in the earth below, budding with seeds and new life. Sharp fresh galbanum underlines the arcane chthonic qualities of vetiver and the magnificent delicate pepperiness of angelica. 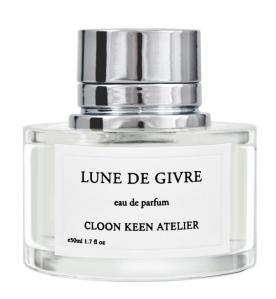 There is another Grimm tale in which an enchantress gives a poor girl three seeds or tiny nuts: in each is a dress, successively magnificent, outshining the stars, the moon, the sun. Lune de Givre has this opulence about it too, graced with a soft embracing cloud of orris which unites the fragrance in a surge of twilit passion, under the darkness of the night sky or the eternal starlit forests. And like a fairy tale, Lune de Givre has a universality to it: perfect for princes as well as princesses. As Tynan said of Marlene Dietrich, it has sex but no gender: a warm and hypnotic experience both calming and arousing, glamorous and serenely timeless.