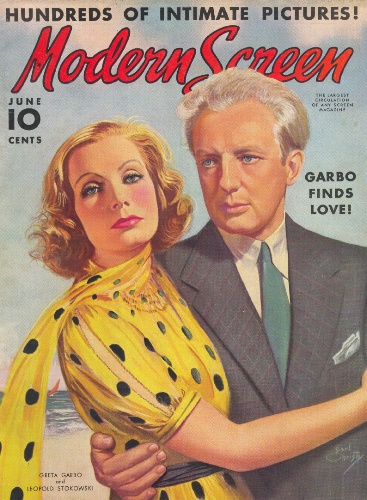 My grandfather was a great Garbo fan. Whenever the Divine One’s latest movie opened in Leicester he’d be off into town on his motor bike. It was after one of these outings, on a dusky summer’s evening, that he claimed he’d had a supernatural encounter; that he’d driven right through a spectral monkish shade gliding across the road. I am always intrigued to hear to which great stars my venerable ancestors were addicted. Their preferences provide thoughtful and unexpected insight into their characters. One’s adoration of a certain actor is as revealing as one’s choice of perfume. I remember my grandfather as bluff and sporty, always gardening or racing, a glass well to hand. But he painted, too; loved Swinburne’s poetry and the novels of Balzac. He had served right through the Great War and was wounded twice. He was acquainted with the shadow side of life. His first meeting with his future bride was unorthodox. He, on his motor bike in a narrow leafy lane, ran into her mother’s funeral cortege. Miss Elliott raised her crepe veil – gazed into the eyes of Mr Craven – and that was that. A scene that might well have come from an early Garbo silent.

She was a funny one, that gloomy Swede, with her family of trolls under the sofa. Greta Garbo always had far more of a following in Europe, in the Old World from which she sprang. Americans found her just too nutty, too glacially and disturbingly beautiful; too much of the outsider. As David Shipman put it¤, she signally failed to muck in. It was to Europe that Garbo regularly returned for her holidays – to England and Sweden; and to the Mediterranean which provided the heat, sea and sunshine that she loved so much. She was once one of a cruising party on Aristotle Onassis’s yacht. Fellow guests included the Winston Churchills, Callas and the Duke & Duchess of Windsor. One of the company later complained of the extreme ennui of the glittering party. Garbo had easily the most boring conversation of any of them, her remarks being mostly about the price of dry groceries in New York.

(But is this in itself not strangely endearing? Rather like Marlene’s homely recipes for sardine sandwiches and boiled potatoes).

The new and exquisite ROSA GRETA by Eau d’Italie now at Les Senteurs is inspired by another, earlier, holiday: this time at the Villa Cimbrone at Ravello. The Villa is noted for its rose terraces and still very much on the tourist route today. Garbo arrived for a stay in 1938, on the arm of her current lover, the conductor Leopold Stokowski¤¤. He was over a quarter century her senior with a great mane of white hair. The fan magazines were baffled. Their editors would have been even more foxed had they been privileged to see Garbo unpack her luggage upon arrival at the Villa. From her one small and shabby suitcase she took a selection of pots of jam. The jam went down to breakfast with her every morning. Afterwards it was returned to the bedroom and locked in the case. I would like to know whether a.) G.G. had made the jam herself and b.) whether Leopold was allowed to try it.

Stokowski was then beginning to make a big splash in Hollywood. He worked with the new teen sensation Deanna Durbin; and was later to be spliced in with Mickey Mouse in Disney’s ‘Fantasia’. Despite his name, Stokowski was English: in fact he was born a short walk from Les Senteur’s Seymour Place store, in Upper Marylebone Street. He was schooled in Marylebone High Street. So it feels as though ROSA GRETA has a strange and unexpected link to Seymour Place. It seems to belong with us, in a very esoteric way.

G.G. had an affinity with roses. Roses have thorns. Unlike her compatriot Ingrid Bergman, there is no rose specifically named for Garbo but the flower is part of her myth. In the 1929 silent ‘A Woman of Affairs’ she emerges distraught and dying from a hospital room to embrace a vast bouquet of white roses as she would a lover. The title card reads:

In the next decade her bizarre on-off affair with Cecil Beaton began at a Hollywood party. Garbo drew a yellow rose from a vase, kissed it and presented it to Beaton who dried, pressed and framed the petals. The shrivelled – richly symbolic! – rose hung by his bed for the rest of his life and was auctioned off after his death in the 1980’s. It was knocked down for only £750 which – whatever anyone says – wasn’t that much, even then. G.G. is not to everyone’s taste. That’s part of the appeal.

ROSA GRETA is packaged in the bright blue and pink that featured largely in Garbo’s private wardrobe. She was especially fond of a certain shade of blue to set off those huge blue eyes, never seen in colour in any of her 27 films – and rarely in photos. The Garbo image is essentially a creation of black and white. It takes a bit of practice to imagine her in clear cheerful shades flattering that honey-tanned skin and the silky hair described by Beaton as ‘biscuit’. And always smelling clean, sweet and delicious in a Nordic natural rural way. If she bothered to wear scent at all, it was usually some vaguely masculine cologne.

ROSA GRETA is sexually ambiguous and intended to be enjoyed by everyone. I love it. It’s a scent into which one can sink: as into a pool or a bath or a bed of roses. This refreshing graceful creation by Fabrice Pellegrin¤¤¤ is a summer confection of white tea, damask rose, lychee (very discreet; not at all gloopy) and ambery woody accords. It has a dewy dampness about it, and a soft mossiness. Rose perfumes are always chancy because they carry such a weight of association and expectation, inherent in the choice of theme. Everyone thinks they know how a rose smells, and how it SHOULD smell when translated into a fragrance. It’s the one flower everybody can identify and name. Every perfumer wants to have a go at creating the definitive rose. It’s the odour of universal myth and symbolism, the fragrance of prayer, myth, fairy tale and passion: “the raptures and roses of vice”. Very apt therefore for associations with Garbo. Like the famous closing shot of “Queen Christina” – “think of nothing at all: make your face a blank” – we each of us read whatever we desire into a rose perfume. You’re likely to find your Heart’s Desire in GRETA.

¤¤ he was married to – amongst others –  Gloria Vanderbilt of designer jeans and perfume fame; and the Johnson & Johnson heiress Evangeline Love Brewster Johnson. Interesting tangential fragrance connections!

¤¤¤ Pellegrin is already well known to us at Les Senteurs as the creator of By Kilian’s Smoke For the Soul.