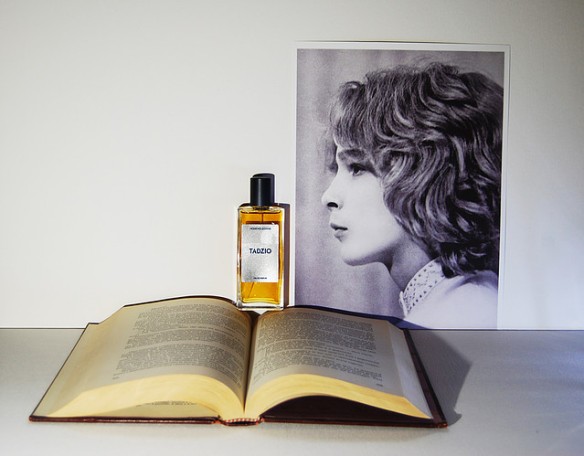 What about that heat, then? How did it affect you? In some ways it did me a lot of good – I was away from the shop and so able to surrender totally to the mercury, and relax. The intensity and ferocity of the sun put paid to my doing anything; even to the extent of shutting down my brain. It was impossible to worry or even to think very much. Delightful. I turned back to some novels of my youth and “lay on the lounge”, behind drawn curtains, like Elsie in What Katy Did. I also sprayed myself ad lib with alternate scents from the Liquides Imaginaires range: namely the dreamy floaty Roman bath experience of Tumultu and the duskier sweet desires of Fortis. Something about them suited the atmosphere of hypocaust very well.

And I re-read The Good Earth, that seismic best-seller of the 1930’s by the great but now almost forgotten Pearl S. Buck. She writes in stately rhythm, like an Old Testament prophet or a spinner of immemorial fairy tales. The Good Earth is an often horrific story of old rural China  – a real eye-opener. Mrs. Buck had been reared in Asia and she knew the score. (Incidentally, the actress Luise Rainer, who won an Oscar in 1938 for her portrayal of the long suffering drudge O-Lan in the MGM film treatment, was a great friend and loyal customer of Les Senteurs). Pearl Buck reminds us that perfume in the China of more than a century ago was an art, a luxury and a seduction. We read much of hair combed through with oil of sandalwood; frequent scented baths and powderings; ‘the perfuming of the eight orifices’; and the luscious aroma of Eight Jewel Rice when brought steaming to table.

(And Mrs. Buck also reminds us of a fragrance tip I’ve often mentioned to you. Be sure to perfume the palms of your hands).

I am always fascinated by the way writers and other creative artists approach perfume, odours and the sense of smell. I’m intrigued by how they celebrate the olfactory mystery, weaving it willy-nilly into various aspects of their creations. So naturally when Les Senteurs invited the sensational Italian brand HOMOELEGANS into the fold I was mightily intrigued and beguiled.

The first three scents in the HOMOELEGANS sequence – the trio we have right now in the shop – are inspired by the complex personalities and creations of three eccentric and tricky twentieth-century individuals. Namely, Thomas Mann, Francis Bacon and Frida Kahlo – two painters, one writer. Quite a handful!

I’ve written about Mann in this column before. His first great novel Buddenbrooks was published in 1904 – and was a huge best-seller in Germany for thirty years until the Hitler regime burned it. In this immense family saga, the sensual smells of good food and sleek grooming take their place in the repetitive rhythms, small hypnotic pleasures and joyous monotony of daily life. HOMOELEGANS approaches Mann via his much later work, Death In Venice: the stifling emotional atmospherics of the Lido; the fatal entrapment of the Lagoon.

Then, Frida Kahlo and Bacon. Francis Bacon’s paintings make me very sick: the very carnality of them reeks. He sees the Beast in us all and reveals it without mercy. I was advised to keep away from that bio-pic ‘Love Is the Devil’, and I heeded warning. Our English master at school used to tell us that Bacon’s pictures looked and smelled like reportage of slaughter houses. And those Popes! Velasquez was quite upsetting enough without Bacon imposing his own peculiar vision.

Much of Kahlo is bizarrely lovely: vivid, weird and mesmerising. The parrots and monkeys and hummingbirds; the surreal humour of “What I Saw In The Bath”; and Frida’s chthonic pre-Columbian fantasies. But she’s not exactly reassuring – and what about works such as “A Few Small Nips”? Very difficult to send to anyone when included in post-card collections. If you put the card inside an envelope – and the subject matter requires that decency – it seems even worse. As though one is a certain covert understanding with the recipient.

Anyone who is loves the enigma of perfumery will recognise that these three artists offer limited scope for a revolutionary approach to fragrance. Consider the way in which the mainstream media approaches scent. You’ll then appreciate how esoteric and even alien a subject perfume still is to many people. Only the other day a wireless presenter remarked on how difficult it is to talk about scent on air. I thought, now why do you say that? To me radio presentations and perfume have a lot in common: both are unseen, and their appeal lies principally in the magic of one’s own imagination.

So don’t take my word for it but come by and try these new beauties on our shelves. They are quite, quite extraordinary. And – as you would expect – headstrong,  ambisexual, wayward, even slightly perverse. There is an extreme ingenuity and subtlety in the way in which the perfumers have used three very disparate and complex characters & themes to create new life, energy and beauty. Art generating art; artifice breeding artifice.

But if that suggests something sterile and contrived then I am greatly misleading you. One of the key aspects of these three perfumes is their forceful impact; their visceral vivacity and vigour; their originality. All the elements that enthrall and disturb in the works of Kahlo, Mann and Bacon are evoked in the scents. A cruel beauty, a beautiful cruelty; fleshy textures and fleshly desire; colour; self-indulgence; pride; confidence and terror.