…proves herself a compelling actress in YIELD TO THE NIGHT (1956). An influential film in the campaign for the abolishment of capital punishment in Britain this is not, however, the story of Ruth Ellis. The Joan Henry¤ novel upon which the script (also by Henry) was based had been published in 1954, the year before the Ellis case. But no doubt director J. Lee Thompson readily enhanced the curious “coincidences” of plot and character: the rackety and unhappily married platinum blonde, the fatal public shooting of the faithless lover; the background culture of night clubs and pre-drinking; unhinged sexual obsession and jealousy. And of course – the frame and core of the film – a vital young woman’s last three weeks in the condemned cell at Holloway prison, told unsensationally¤¤ but in semi-documentary and horribly dreary detail. Joan Henry had been banged up in Holloway herself, and she was not sparing with the local colour. It’s not at all an easy film to watch. You may have to take it in short tranches, at least the first time around. But view it you should.

Mrs Mary Hilton (Dors) has been sentenced to death for gunning down her rival, the rich and disagreeable Mrs Lucy Carpenter in a London mews. Their mutual lover, Jim, has gassed himself in Mona Washbourne’s lodging house on New Year’s Eve, to the strains of Knees Up Mother Brown and Little Brown Jug coming up the stairs from his landlady’s party. Mary then uses Jim’s wartime revolver to commit her murderous act of despair and revenge. The casting of Dors ( an old friend and colleague of Lee Thompson and Joan Henry) was a masterstroke. Diana’s screen image and her apparently raffish but also obscure and ambiguous off-screen personality could not have suited the character better.

In flashbacks to the events which led to the crime, Mary seems a typical Dors character: exuberantly blonde, open-hearted, bosomy, impetuous and fun- loving. The audience is pre-conditioned to expect bad behaviour from Dors: was  not the star once publicly condemned by the Archbishop of Canterbury? Mary is one of a long line of individuals in British Cinema whom my mother used to describe as “naughty little girls”: discontented & sexually active young ladies who work in “Beauty Shops” but whose speciality is making trouble. Remember Phyl, landed with the manicures (and all the Allied Services) in MILLIONS LIKE US? And Queenie in THIS HAPPY BREED, who runs off with a married man and breaks her parents’ hearts? Mary’s discreetly curtained establishment – “Martin Douglas” – is right at the centre of things, perhaps in Sloane Street or Bond Street. “Lots of people came into the Beauty Shop…” recalls Mary in Holloway. The shop is a maybe a euphemism; certainly a metaphor for life, for sexual experimentation and adventure.

No completely “nice” girl would be standing there on counter, looking edibly gorgeous in “that sort of place”, selling perfume. That’s made quite clear. Mary is on the slippery and risky slope of living with vicarious luxury, even if a romantic dinner later consists of a tin of Heinz spaghetti. But, such a glorious counter of scents as Mary has to offer! Never was such splendid product placement of Guerlain and Lucien Lelong. The glorious Shalimar parfum flacon (1 oz) even gets its own glittering close-up and we glimpse Mitsouko, too. You’ll probably spot other old favourites if your eyes are sharper than mine.

Then Jim appears, sniffing around and trying to remember the name of horrid Lucy’s scent:

– ‘…not as cloying as that. Something sharper, more like the bouquet of very good brandy..’

Mary is an excellent saleswoman  – ‘you’d be fortunate to have this person work for you!’: outgoing, immaculately groomed, knowledgeable of stock. Her counter is spotless; her manner is a nice blend of light flirtatiousness and reassuring briskness. And she’s not afraid to “ask for that sale”.

It turns out, of course, that Mary is wearing the perfume in question: an ironic re-orchestration of the old shtik of wife and mistress being given the same fragrance to avoid “mistakes”.

The name is inspired: the plant which in the language of flowers is said to mean “please relieve my anxiety”; the coldly beautiful, poisonous and witchy hellebore which blossoms imperturbably through the coldest months of the year, decked in the semi-mourning colours of mauve, white and dark purple. It is one of the many strands of the flower imagery that plays such a major role in the film, echoing  the Christian burial service:

“He cometh up and is cut down like a flower…”

‘”Loveliest of trees, the cherry• now
Is hung with bloom along the bough…”

This triggers off all kinds of thoughts in the contemplative viewer – Christ’s Agony in the Garden; Our Mother Eve in Eden; and another poem, Kipling’s sermonising, sententious but irresistible The Glory of the Garden. Miss Bligh unpins a small bunch of violets••• from her own dress and presents them to Mrs Hilton:

‘There you are, my dear. They’ll give you some water and you can put them beside your bed.’

But in her cracked and peeling cell with its parody of an en suite bathroom, and the dreadful “Other Door” at the foot of her bed, Mary cannot even do that. A ghastly “caring” provision is made for every bodily need and necessity in Holloway – if only for three weeks.  The constant starchy meals and mugs of cocoa*; “tea!”; ‘plenty of sugar’ dumped  on her porridge by a flustered wardress. There are the endless footling games of chess and cards to “distract” the prisoner; the smothering fuss over the blistered foot of one so soon to be killed. The terrible naked lights are kept on twenty four hours a day ( all the better to see the unsparing truth ) and there’s an upsetting scene where Mary is bathed like an infant while a wardress cuts her nails. Yet the intrusion of a spontaneous posy of flowers cannot be accomodated. The wild violets with their disturbing ungovernable fleshy sensual scent do not “fit” – and the tin mug in which they are dumped will not sit on the window sill either.

Mary’s last three weeks on earth are in the month of April – “the cruellest month”; the fertile, Easter month; the sweet rainy month of The Canterbury Tales. Life should be crazily burgeoning not being brought to an abrupt and unnatural end. But what a weird and blasted April Lee Thompson creates! The prison yard sets are dressed to look like a nuclear winter. “There’s a bitter east wind”, and not a bud on the twigs. Only at the very last, on Mary Hilton’s final afternoon, as she comes to some sort of terms with her fate does the sun briefly come out and there’s a distant glimpse of a daffodil.

But by then the light of the sun is too bright for Mary and she asks to be taken back to her cell where the last smells are of bromided tea, the medication of calming injections, the slopping-out pail
and the final cigarette which burns on long after Hilton’s life is snuffed out. 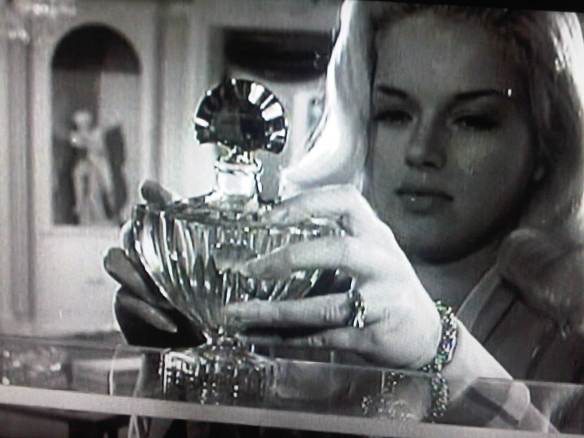 ¤¤ unlike the film’s publicity.

1 thought on “Wait For The Moment When DIANA DORS…”