Kind regular readers of this page will know that I have a penchant for perfumes redolent of the unconscious and the realms of sleep. The bedroom is the room where I prefer to be: years ago I was told by a friend in analysis that this is a bad sign, a refusal to confront Life. This I doubt seeing as how our indubitably vigorous and confrontational medieval forefathers revered the bedroom as the only private space in manor or castle: a luxury to which the poor, bedded down with the cattle and pigs, could not aspire. A room for contemplation and introspection: the scene of birth, begetting and dying. The holy of holies of the home and family. Now, a reversion to life in the bathroom – a return to the warm waters from which we all sprang – that really is a worrying development, as witness the endings-up of Callas, Marat and Blanche Dubois.

Two scents to loll alongside you on the pillows, then: Poudre de Riz and Cologne Pour Le Matin. Both mesmeric and hypnotic, perfumes to drowse and lull. The germ of Poudre de Riz comes from the Belle Epoque novel “L’enfer”, a classic study of voyeurism in which a jaded gentleman spies through a hole in his hotel bedroom wall at the changing scenes of love next door. Pierre Guillaume’s creation catches the languor of spent passion, slaked desire – the scent of those observed, not of the Peeping Tom. It is also the odour of that crimson room of assignation where Emma Bovary and her lover meet at Rouen; the powdery pearly smell of Lea’s great temple-of-love bed in Colette’s “Cheri”. Pan-sexual, sweet and ambiguous Poudre is the aura created by love and its practitioners – a close, airless evocation of hair and warm skin gleaming with monoi oil and nacreous with sheer rice powder. An emanation of crepe de chine, lace, silk and feather bolsters. Compare it if you like with an authentic Edwardian fragrance, Shem el Nessim: there, too, is frou frou and susurration – but Poudre de Riz is emphatically interior and intimate while the Grossmith cracker is for the grands boulevards. Poudre is marabou, chiffon and monkey fur, whereas Nessim sports bird of paradise plumes and chinchilla.

Draw back the velvet drapes, leave the city for the Midi dorée and smell Cologne Pour le Matin, Kurkdjian’s hypnotic child of sun and heat. This is a fragrance to celebrate the selfish animal joys of waking only for the pleasure of dozing again; the almost liquid relaxation of the body on Egyptian cotton sheets behind slatted blinds; but this time alone, cat-like, in love with sleep and torpor. Here the powdery quality is of lavender, iris, violets, thyme – veils of mauve and blue sun-dried Mediterranean flowers shimmering in the heat starred with specks of golden dust in the filtered bedroom light. You can almost hear the cicadas in the garden below the windows, and the whisper of the sea beyond. The sparkle and purity of orange blossom negates sex but emphasises escapism, a spiritual freedom as the body surrenders to heat, the white light of noon and clean dreamless sleep – a sleep like falling down a deep green well.

I have a feeling Aromafolio has still not yet exhausted this theme. Dors bien! 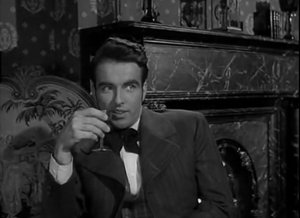 Those of you who have studied the shorthand of the old cinema will know by now that any mention of perfume spells either luxury or trouble. Preferably both. Before cinema, the stage: Shakespeare soaked his Cleopatra’s sails with scent centuries before Theda Bara bared her bosom in the silents. He showed us Lady Macbeth’s murdering hand – the smell of blood triumphing over all the perfume of Arabia: both equal accoutrements of evil and ambition.

Old cinema, being simultaneously daring and deeply conservative, has little to say on the subject of men and scent except for a visual footnote (usually in costume pictures) on the degeneracy of a character – we think, say, of wicked Basil Rathbone’s beauty routine in A Tale of Two Cities. But there is a wonderful sharp use of smell in William Wyler’s magnificent The Heiress (1949), an adaptation of Henry James, in which a plain, naïve but very rich spinster Catherine Sloper (Olivia de Havilland) is preyed on both by her father (Ralph Richardson) and by a charming fortune hunter (Montgomery Clift as Morris).

Some critics have found Clift, then at the apogee of youth and his weird dazzling beauty, almost TOO convincing as Olivia’s mercenary suitor; they don’t know whether to boo or hiss. Such confused viewers prefer things spelled out in black and white: they like the modern movies. But both actor and director know exactly what they are about. Twice in the screenplay we hear that Catherine is making Morris a gift of buttons – she means dress-studs of diamonds and rubies; but for a flash we see the flicker of disappointed greed and baffled dismay in Clift’s eyes as he thinks of bone or wood shirt fastenings. Stars had faces then, all right; and like Norma Desmond, Clift can say anything he likes with his eyes. (Interestingly he had already turned down the role of Joe Gillis in Sunset Boulevard on the grounds that his fans would find the character sexually unsavoury).

But the canny viewer has already been offered a broad olfactory clue as to what’s going on: when Catherine’s father comments on the powerful sillage of Morris’s bay rum cologne we know something is badly awry chez Sloper. A penniless overly handsome young man, reeking of scent in a professional gentleman’s house? a gauche daughter upstairs of maybe perfunctory hygienic habits? – we have had a glimpse of Catherine’s lick-and-a-promise preparations for a ball. Surely this must be a recipe for total disaster. And so it proves. 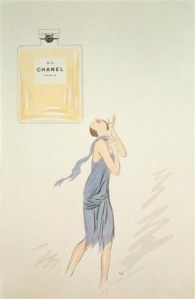 We’re off! Brad Pitt’s campaign as the new Face of Chanel began last month. It’s quite a cute choice on many levels : the Legend and the Heart-throb teamed at last, though why a perfume should need a “Face” at all is beyond me. At this high level of classic perfumery, every fragrance already has its own very well-developed and assertive personality. No 5 of all scents already has an unmistakable and unforgettable face: Mlle Coco’s black-eyed little marmoset features, cigarette glued to lower lip beneath a broad-brimmed hat, seem to grin beguilingly from every bottle – the true look of genius, tinkering around in her labs with Ernest Beaux and selecting her formula by instinct and superstition.
What could be more fascinating, appealing and sellable? Anything else seems redundant; it’s almost the equivalent in art terms of choosing a PR look for a painter – the Face of Tracy Emin or Francis Bacon.

I guess the modern axiom insists the youth market must be enticed with an allure of great big blazing star: a former Face, Nicole Kidman, despite a massively expensive publicity campaign and that seemingly endless tv ad never seemed to me quite right for Chanel: rather too nervy and wired. Maybe Brad’s somewhat laconic and laid-back glamour will be more effective as he becomes a projection for every man who ever courts with No 5, and more to the point, the guy from whom every girl would like to receive a flacon.

Endless “scientific” surveys and tests, we keep being reassured by the popular press, show that men of Brad’s type with soft, big-eyed rounded features – somewhat baby-faced, something of the child still about them – appeal most to modern women as reliable safe lovers and putative fathers. Maybe Chanel are following the tabloids’ cut- out- and- keep advice. A wilder, less cosier masculinity might conjure up a more exciting image but that seems not to be generally desired, by the opposite sex at least. 21st century men have been so demonised, ridiculed and rendered so drippy and in their advertising image that the Richard Burton/Maxim de Winter/Errol Flynn type seems to have gone for good. Brad’s iconic screen Achilles image – all bronzed muscle and flowing blond hair – appeared ostensibly virile but there was also something of a parodic tribute to Marilyn Monroe about it. It teetered on the verge of doll-like, suggesting the sex roles reversed: a passive man to be bossed about by his lady friend, a chunky nugget of eye candy with a gift wrapped bottle of Chanel the size of a chocolate box.

But there’s also an interesting ambiguity about choosing a male Face: maybe Brad should encourage his brothers in arms to have a try at wearing No 5 themselves… How subversive would that be – yet eminently practical and creative. The musky base notes tend to be brought to the fore on a man’s skin and smell darkly, richly wonderful; and not at all feminine – if you’re worried about that sort of thing. The male hormones generally burn through the rose + jasmine to reveal the vetiver and sandalwood beneath. A perfumer can do no more than propose that a scent be male or female: the publicity campaign is what anchors its gender in the public mind, that and a certain association of ingredients. Flowers for girls, woods for boys: a dull old cliche neatly inverted by Vita Sackville West in “The Land”:

“Every flower her son
And every tree her daughter.”

The British at least are far too constricted by ideas of what they are “allowed” to do with scent. May I wear it at the office? In the morning? On holiday? On my hair? For many people perfume is still the boss. Listen: you can do anything you like with it: bend it to your will and pleasure. It may be a genie in a bottle, but like Aladdin its you who are in command. Chanel No 5, a best-seller since 1921, is of the era when scent was still a huge luxury and far more the preserve of the wealthy artist, socialite and aristocrat who felt far less constrained by social mores and wore perfume as they pleased. Gary Cooper, Noel Coward, the Duke of Kent and Diaghelev are all said to have sported Jicky, Arpege, Mitsouko, and No 5 con brio, to memorable effect. Luckily these new Perfume Faces are usually contractually obliged to wear the product: what a chance to double sales of the world’s most famous scent. Ball in your court, Mr Pitt.